Laying cables in the ground with the GM4 crawler 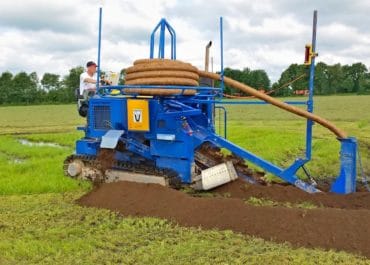 When creating trenches for irrigation systems, drains and underground cables, trench cutters for laying cables in the ground are the first choice. LIBA has different trenchers in its programme, which convince with their all-terrain and powerful caterpillar drive, a user-friendly control system and the extremely robust construction.

The small but powerful GM 4 caterpillar for laying cables in the ground has clear operating elements and is therefore suitable for quick familiarisation, as its mode of operation is immediately apparent from the very first use.

Trench cutters for cable laying in the Ground

The low centre of gravity of the cutters guarantees a safe stand even in uneven terrain. If a tree stump should ever appear on the path, this will not stop the cable laying. The robustly worked head is equipped with sufficient ground clearance for the crossing. With us you benefit from many years of experience and professional expertise.

However, if you don’t have your own equipment or qualified personnel, renting trenches is the right option. We come up with an attractive total package consisting of expertise, good ideas, high-quality materials and the right machines.

Our large fleet of vehicles includes equipment for all types of earthwork. In the rental sector, we have various ride-on trenchers for normal to heavy soils at your disposal. We always rent out the equipment with one operator.

For rental we have 3 different trenchers as well as their attachments for cable laying in the ground available.

There are two methods of protecting the cables, especially in the ground, from penetrating moisture.

third cable level and used in the local area are protected against longitudinal water The cavities between the pairs of wires are filled with Vaseline (in newer cables with plastic wire insulation).

In case of cable damage, water only penetrates the cable sheath directly at the damaged point. It is not possible to locate the leakage. Older cables with paper insulation around the respective cores have no filling, which means that penetrating water corrodes the cores more quickly and the telephone connections therefore fail faster than with plastic cable. However, leaks can be detected more quickly and the fault can be rectified.

For cable laying in the ground, an electrically used cable laid in the ground with a particularly robust insulation to the outside, the cable sheath, which prevents its destruction by chemical influences in the ground or in the soil of living small animals (rodents), is necessary.
Underground cables have several advantages over overhead lines. They are protected against damage – among other things due to weathering – and do not visually disturb the landscape. Disadvantages are the higher maintenance costs and the more difficult localisation of disturbances, such as those caused by construction work and unintentional damage to installed underground cables. The higher costs involved are a disadvantage in energy applications in the high voltage range.

Underground cables are laid at a safe depth to protect them from damage. In open terrain, the cables are laid efficiently by a cable plough, whereas in rocky and built-up areas they are laid in a previously opened trench. Other laying methods include controlled horizontal drilling, for example to pass under a road, whose roadway remains untouched, or a small stream. Larger bodies of water can be crossed under with a culvert.
For mechanical protection, underground cables are partly laid in cable protection pipes and also in a sand layer surrounding the cable, so that sharp-edged stones cannot cause damage when the ground is stressed, for example by vibration from nearby rail or road traffic. For voltages below 1 kV, underground cables are usually laid at a depth of 60 cm, and 80 cm in the road area. In addition to route warning tape, plastic plates as cable cover bonnets or plates are used as stab and dig protection.
There is no legal requirement for depth layers and cable protection of power cables in the Federal Republic of Germany.
The depth at which cables are laid is determined by the cable owner. These are based on DIN standards and common practice.
At higher voltages, greater installation depths are common. Extra-high voltage lines with 400 kV, for example, are laid 2.5 to 3.7 m below the surface of the earth, or the cables are laid in a specially created tunnel or pipe system which, in addition to facilitating maintenance, also serves for cooling.
Since 1964 trench cutters are manufactured and sold in the factory of “LIBA-Lingener Baumaschinen” under the name “Grabenmeister”. In a small production hall there were the beginnings of the production of trench cutters, which were already sold worldwide at that time and have proved their worth for a long time in the clientele. Continuous development in adaptation to current practical requirements and advanced technology are the basis of our good reputation.
You can purchase our “Grabenmeister” trench cutters as self-propelled, excavator-mounted or tractor-mounted cutters and use them in the following areas:

If you have any questions about our trench cutters for cable laying or would like a quotation, please use our contact form. We will deal with your request immediately and contact you. You can also call us at +49 (0) 591 – 76 314. We look forward to your visit! 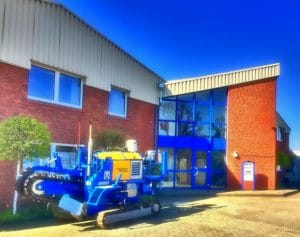 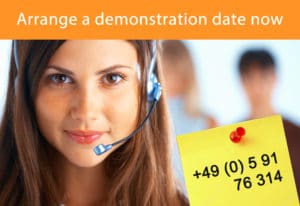